You may or may not know I enjoy maps. I also enjoy flags. Often these are not expressed that often and I tend to concentrate on other things, though you may have noticed a previous post on changing flags during the failed Scottish referendum to depart the United Kingdom. Well, a TED talk on Vexillology excited me on the topic once again:

This got me to thinking, how could I redesign my adopted home state of South Dakota?

Why? Well, while there are always exceptions, I generally think the rules Ted Kaye put forward are pretty good:

1. Keep it simple. (Ouch. The overall design is simple, but the inclusion of the great seal really makes it needlessly complex.)

2. Use Meaningful Symbolism (Okay, the blue for the open blue sky and endless possibilities, the sun for… the sun and the previous state nickname, the sunshine state.)

4. No lettering or Seals (Double ouch. South Dakota uses both lettering and a seal. Worse, the seal has lettering on it as well, both the motto and the name of the state. The state is named twice! I feel like the flag comity was really worried that people wouldn’t know the name of their state)

5. Be distinctive or Be related (Okay I think. It feels fairly distinctive and other flags that use the broad blue backdrop also are wide-expanse states, such as Alaska.)

So here are a handful of my initial ideas on a theme: 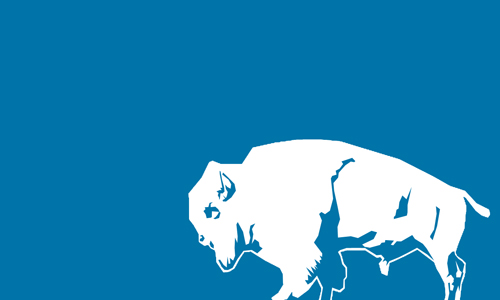 First idea was to keep the sky blue expanse, but take another symbol, the Bison, which is both a symbol of the hearty nature of the people of South Dakota, and also harkens to the native tribal populations, as the bison was an important part of their culture. The white buffalo could be construed as a symbol of hope. The bison is small in the corner to remind us that we are small compared to the vastness of the state we are caretakers of.

Here, I take the new element and incorporate an old element of the sun from the original flag. Sans the great seal of course. Though to be fair, the original South Dakota flag did not have it either:

One more for today:

Here the nine red stars represent the nine native tribes of the Sioux Nation that reside in South Dakota. The red represents the struggles and broken promises made to those people. This makes the white bison hopefully a stronger symbol of hope. Hope that we can all work together and build a stronger state together. Or something like that.

The biggest problem I have right now is that the bison might be too complex. Future iterations might have a simplified or stylised bison.

Do you have any suggestions or designs for South Dakota you’d like to share? I’d love to hear!