Everyday, as we walk down the streets and live our lives, we form and reinforce memories of time, place, and things. A familiar scent can recall distant memories of childhood, or a song in a foreign land can make us think of our distant friends and family. Sometimes these memories feel locked deep, just waiting for the right key to unlock them and bring them out. This is where serendipity comes to play.

As I walked around the Insadong area I stumbled by this statue. What’s this? It’s the kind of attention grabber any gallery would love to have. It’s recognisable, it stands out, its different enough, yet friendly and familiar. For me it stands precariously on the edge of cliché and popularism, yet remembering that the line between cliché and power, between the accessible and a sell-out isn’t so much a fine line as it is a giant, fuzzy blur, I decide to look closer.

I’m not sure how I feel about this piece. I love the size. I love the brute power. However this particular piece isn’t quite… dynamic in movement. It’s a familiar kind of creature, yet it’s made of familiar objects. For my non-Korean audience, a good portion of this sculpture seems to be made of these nickel-silver pots: 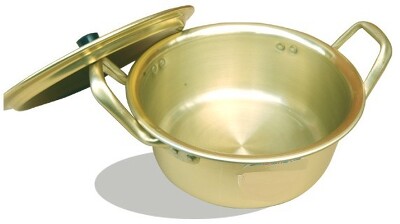 They’re cheap and plentiful. Use them for cooking ramyeon (ramen). Look closer, you can see these pounded and disfigured forms creating the apparent bulk of the beast.

Playing with the memories of discarded cooking ware and memories of fauna most have probably never seen in person. Interesting. Well, even though I have mixed feelings on this piece, I decided to enter the gallery to see what’s inside.

Engram? That sounds familiar. What does that mean?

What traces of memory do we find?

The texture rich triptych is composed of abandoned cans crushed together and cut to create a flat surface. The frame is as much a part of this work as the cans contained. Fleeting memories of the thousands of times we thoughtlessly enjoy a drink. How many memories from childhood are crushed and compressed inside our failing, rusting mind?

A growing trend in contemporary art seems to be that of ‘upcycling’, which is just a fancy rebranding of the word ‘reusing’ – but with a twist. It is to reuse but to create something of greater value than the original. A great way to get more money out of people willing to buy into branding. A reused or recycled object is dirty. An upcycled object, well, that’s special. This is not a new thing of course, but the rebranding of this action is. Forgive me, I love the idea, but I’m exceedingly cynical of the terminology and the shallow opportunistic feel it gives.

There were two more ‘Engrams’ of abandoned cans:

These two are almost identical. While the texture is interesting, I can’t say I’m a fan. Overall the texture becomes very flat and similar overall. There is at least a little bit of variety in the triptych, though it suffers from the same problem. Up close though, it becomes a bit more interesting:

A bit. I feel a little bad for not liking these more. It’s not quite as accessible as his Revival series due to the apparent abstract appearance. I do like the idea of buried or forgotten memories, but concept alone does not carry an idea for me.

While interesting, the real stars of the show are the other members of the Revival series. Meet the Kudu.

I find this piece more impressive than the moose guarding the gallery. While not extreme, the posture is more dynamic with the twist of the head and the hind legs in a more natural pose. The ears seem to be scanning their surroundings, not quite focused on anything yet. I love the texture of the pot lids as they go down the spine and tail of the creature.

And to finish off this gallery exhibit are a pair of iguanas:

I think I like these guys. The texture and rhythm of the nickel-silver pounded and moulded together in the familiar iguana shapes is entrancing. Or was that enchanting? If you get to the gallery before the exhibit gets pulled down (March 4th, 2014!) they include a nice little video showing how the artist created the work.

Or you could visit his blog over on Naver:

He has some very nice work up there. I particularly love the pangolins, which, after seeing them on the video and his blog, I wish had been at the exhibit. But we can’t have everything in life, now can we?

If you want to drop by before the show is taken down, check out:

You can find it easily from the Insadong McDonalds. They usually have good shows there, so check ’em out after the date too!