SALT is a hybrid. It’s a mini art gallery/ cafe/ restaurant. Most notable for their bibimbap, which you can get for take-away if’n you don’t feel like staying in one place.

While the art space is alright, it’s more of a minor attraction for me, though I am glad they created glass barriers that protect the artwork from food splattering and creates a mini corridor you can walk through to enjoy the pictures.

The unfortunate thing about this lovely space is that it’s in the basement (no windows) in a part of Jongno that isn’t the most attractive. Not the worst part of Jongno mind you, but not a place I would go out of my way for. Luckily it’s not far from the Chungye-cheon, so if you’re walking by, pop up for a visit.

The main dish here is the bibimbap. You can get other dishes of course, but the bibimbap is quite well done, and very fresh. They have three main kinds of bibimbap.

This is a quick, basic rice with veggies and an egg. No meat, no extras, just straight up wholesome bibimbap. And it’s cheap owing to the lack of meat. 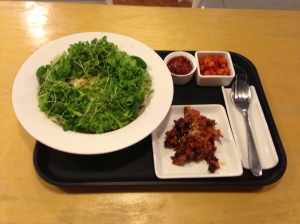 Served in a big bowl, the spicy pork and gochu sauce is served on the side so you can add as much or as little as you want. The greens are delish, but I found, at least when I tried it, the chef added too much of the titular salt to the pork. I’ll try it again in case it was a fluke. 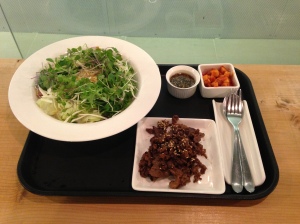 Served in the same style as Bibimbap I, this style replaces the gochu sauce with a sesame oil mixed with soy sauce. I found I prefer this dish as it has a much lighter yet filling feel to the spicy pork. Likewise, the beef isn’t over salted. It’s a delight and I would highly recommend this one!

Personally, whichever dish I choose, I find that I like to mix in the sauce or oil first and munch on the bibimbap, only adding the meat when I’m about half-way finished. Though in large part this is because if I have meat in my dish, I really like to have meat in my dish. I made a gif for you to illustrate:

SALT also serves coffee. It’s not special, nor is it bad, just standard espresso based drinks. You can also get yourself some table wine if you want to feel a little fancier.

Or you could actually go there: