A Closer Look at Cheongdo Bullfighting

The Cheongdo trip was fun and all, but perhaps you want to know a little more about the bullfighting itself. Well, I’ll be happy to oblige. And if you weren’t interested…

Too bad. Moving on!

This Ain’t Your Father’s Toreodoring

Unlike Spanish bullfighting, which had its origins in the Roman arenas of old, this local variation is said to originate from bored farm boys during the lazy days of summer. I can relate. This leads to the bigger differences. The Spanish bullfighting is man versus bull, whereas the Cheongdo bullfighting is bull versus bull. The former often ends in the torture and death of a bull whereas the latter the bulls seldom get seriously injured. The former is presented as a show like the gladiatorial days if old, the latter, much more like a wrestling match. Cheongdo bullfighting really reminds me a bit of ssireum. Even the mascots wear the little ssireum belts. 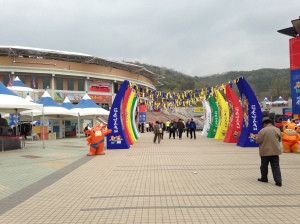 Everything is thrown down at the Cheongdo Bullfighting Stadium (청도 소싸움 경기장), a new complex finished recently  to accommodate the annual international bullfighting festival which first started in 1999. The stadium is far enough out of town to promote taxi or bus usage, which will set you back about 6-7,000 won for the former and 1,200 for the later. Plus the wait at the bus terminal.

The Name of the Game 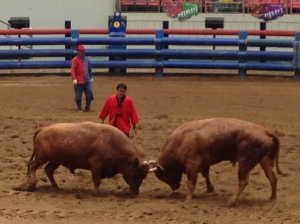 I’m fuzzy on the details because I didn’t have a good guide, so here is the cliff notes version. The bulls face off and score points based on the kind of strikes they hit against heir opponent. Though that seems fairly irrelevant seeing as the bull that backs down and runs away loses. Perhaps the points are used for the off chance the bulls fight to a stand still. Come to think of it, I don’t know if there is a match clock or not. Hmmmm.

The Way of the Raging Bull

There are eight kinds of techniques employed by the bulls in the arena:

밀치기 – the Pushing Strike
All the energy of the bull is put into this technique as it first strikes and pushes back its opponent with pure brute strength.

머리치기 – the Head Strike
Not to be confused with FPS head shots, the head strike is when the two bulls hit heads without using their horns. It’s actually one of the most common attacks.

목치기 – the Neck Strike
Striking the neck of the opposing bull requires strong technique and timing. Unless I’m reading that word wrong and it requires and old sword technique. Or an ancient morality technique. Or maybe the technique of the desert island.

옆치기 (배치기) – the Side Strike (the Belly Strike)
The side strike counts as a finishing blow, though granted by the time this strike is made the other bull is already running.

뿔걸이 – Locking Horns
This method of attack starts with hooking the opposing bull’s horns and forcing it’s neck down as in submission. Bow before your superior!

들치기 – the Upward Strike
The bull will watch for a chance to deliver a powerful upward strike, hitting the opposing bull on the underside of it’s neck. Ouch. It’s the bull version of an uppercut!

연타 – the Barrage
A high level technique consisting of a continuous succession of head strikes which become horn strikes. Attack! Attack until you die!

Each match will begin something like this. First, the bulls are brought out one at a time with appropriate announcements by the commentator. If you don’t know Korean well, feel free to ignore this, you probably don’t need to know unless you’re doing any official betting anyway.

As the bulls are lead by the noses (literally) by their trainers/owners, you can hear the strong bellows echo through the stadium. The bull’s voice is powerful and moving, even when you’re in the nose bleeds. It’s a bit eerie really. Once the bulls are ready to enter, the gates to the ring are opened and the trainers pull them toward each other in the centre.

Different trainers will interact in the ring in their own ways. Sometimes this is just as entertaining as the actual match. Some hang back and let their bull do it’s job. Others verbally goad their bull on. Sometimes they get really close and shout. It’s really funny when both trainers do this, especially since they often bob up and down and then have to dodge out of the way as one bull gains or loses ground. From what I saw, usually the trainers who shout at their bulls lose the most. But that’s just from what I saw.

Final Thoughts and Basic Directions
(As though my directions are that good anyway. Take a left at the bank.)

Unless you are completely opposed to humans using animals for any and all purposes not necessarily in the animal’s best interest, it might be worth checking out at least once. They do have bull fights every weekend, but for the best atmosphere, go during the annual festival.

It’s in Korean though, so you might want to get a Korean friend to help you decipher if you’re not particularly good at it yet. YET. Yeah, I’m looking at you. You know what I mean.

Oh, right, and to get to the Cheongdo Bullfighting Stadium, you can take the slow train to Cheongdo station. From Seoul that’ll take about 4 hours and 23,000ish won one way. If you want to go faster you can shell out some more cash for the KTX and take that to East Daegu Station and transfer to the slow train for a few extra stops. Or just take a taxi. It’s not that far. Or maybe just take a bike path if you have a few extra days.

Oh, and if you’re going to Cheongdo Station, you can take the bus from the bus terminal. It’s just north of the train station. Should cost about 1,200 won. Or take a taxi. That’ll set you back 6-10,000 won.

Or you could read my previous entry on my trip to Cheongdo. It’s more fun than poking out your eyes! I hope.

*Note – All photos are taken by me except for the photos in ‘The Way of the Raging Bull’ section, which are taken from a Cheongdo Bullfighting brochure.