A Visit to Tapgol Park

Across the street from where I work is a small city park. As with much of Jongno, it is often filled with the old, the homeless and the curious. It is a park filled with much history and while it might seem a tad dumpy, it’s still a proud little park.

Welcome to Tapgol Park. Here, let me show you around.

On the south end of the park is the main gate. The name, written above the entry, says “sam-il-moon”, or “Three One Gate (Three-One implying March 1st). Back in 1919 Korea was under imperial rule of Japan. Sad to say the US wasn’t too helpful at this time, not even with moral support. But that’s another story. On March 1st of that year there was a large student protest demanding independence. They even had this declaration of independence set up and read. This didn’t go over so well and while there was a large surge of patriotism and attempts at mobilising, the Japanese military was capable of holding control of the country. Just inside the gate is a monument to the declaration of independence declared on that day. I’ll go over the details of the declaration some other day.

Yet already at that time the park was old. Well, actually young by Korean standards. At that time it was 22 years old, but of note, it was the first modern public park in Seoul. For all you Irish fans, it was actually proposed by the Irishman John McLeavy Brown who served the Korean king, turned emperor, Kojong. However the history within the park is much older. Recall the name is Tapgol Park, which translated is Pagoda Park. Well, it is so named for a reason.

Protected by a large glass case to prevent any more erosion or vandalism, Tapgol Park’s titular pagoda, literally named the ‘ten storied pagoda’, is one of two remnants of the old Wongak Temple that used to occupy the grounds. The pagoda dates back to the 1400’s, though the general anti-Budhist stance of many of the Joseon kings eventually turned the grounds of the temple into a kisaeng (similar to the Japanese geisha) house. The pagoda survived, but it’s a little worse for wear over the centuries.

The other artefact on the premises is a monument stele. You can see it under this pavilion. 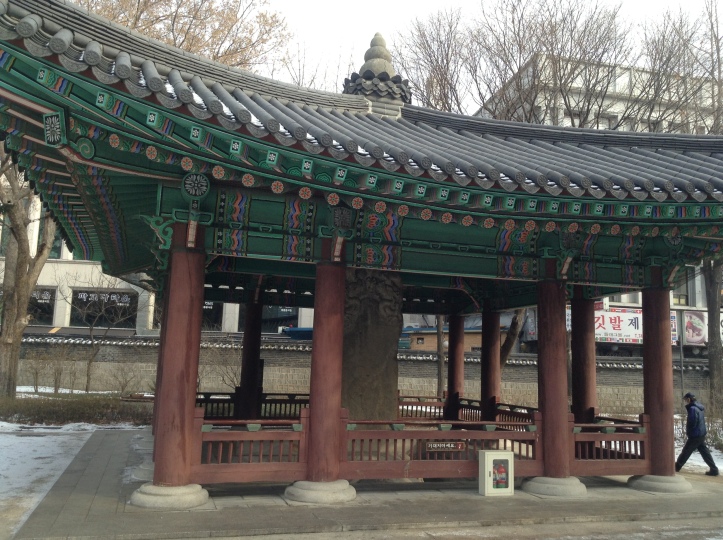 It’s also originally from Wongak Temple. You can see the top carved into two entwined dragons.

You can barely see some of the characters, in a ‘seal script’ writing style. But if we look at the base of the monument….

I don’t know if it was originally designed to be in an apparent pool to look submerged, or if that’s what more modern builders decided when they were constructing it’s current home. Evidently giant nose turtles love literature and love to carry heavy burdens, so they go around carrying these monuments on their back. One such turtle is said to carry mountains on its back where eight immortals live, but I think that’s more a Chinese story. This guy here looks pretty content with the stele on his back, even though almost all the writing has disappeared. You might remember some of this guy’s friends in a previous post of mine.

Along the northern edge of the park is a series of 10 bas reliefs depicting the events of March 1st, along with a poem commemorating the event.

I wonder if they chose ten bas reliefs to reflect the ten stories of the pagoda.

After I finish translating the descriptions (and maybe even the poem), I’ll do a full post on these bas reliefs. I might be able to find the translations online, but I need the practice for my Korean skills.

I’ll also try to add some historical and cultural details where I can.

If you’re interested in visiting Tapgol Park, the easiest way to get there is from Jongno 3(sam)-ga station exit one. Go straight from there, it’s literally just a block away. Likewise Jonggak station, exit 11 would also work. But then you’d have to cross a busy street. Just sayin’.

Until we are all free from tyrants.