A Chance Encounter with a Deer

Today was cold, -14 °C, or 7 °F for us yanks, but I was well dressed and itching for journey. I walked to the palace and walked up the west wall. I won’t bore you with the details, though as I walked northward I did come across some guards. This area was getting close to the presidential mansion, the fabled ‘blue house‘ so named, not for the walls, but the roof. If I recall correctly, back in the Joseon Dynasty blue tiled roofs were usually reserved for the actual building within the palace where the king lived. It’s one of the myriad ways the modern democratic government tries to tie itself spiritually to it’s history, as a rightful successor to that rule.

But I digress, I talk with the guard in Korean, I let him practice giving me directions in English and he compliments me on my Korean. Not, mind you, because my Korean is good, but because most non-Korean residents can’t even manage my pitiful amount of the language.

I veer East, passing between the old palace of a dead kingdom and the new compound housing the world’s 12th largest economy. Passing another set of guards I find a fork, south towards a path I know and north, to the unknown.

But, what to my wandering eyes should appear? 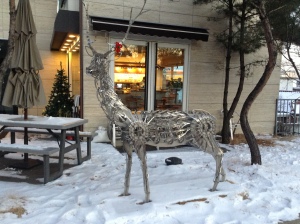 I cautiously approach the creature. I don’t want to frighten it.

It hasn’t startled yet. I don’t make any sudden moves.

I don’t think it’ll bite, so I decide to be a little friendlier.

Surely it would be okay to…

And that, as they say, is that.